Out of 900 million dogs worldwide, 700 million of them live on the streets.

This is an enormously high number. Because of this, I as well as numerous animal welfare activists, are happy about every single rescue dog, who finds a great home in a family.

Since a few weeks, I have had a second rescue dog. So I live together with my seven-year-old former street dog Nala from Romania and a five-month-old young dog named Swift from Spain. Both spent their first weeks and months of life in a shelter until they moved in with me.

What it means to take in an animal welfare dog

Adopting a dog from a shelter is a great thing – but it is also not so easy.

First of all, you have to find a suitable animal welfare organization – unfortunately, there are some black sheep here, too. Both of my dogs have special adoption stories and in most cases, it doesn’t work out that you choose any dog and that dog moves in with you right away. With Nala I searched for a long time on the Internet for a suitable dog. She is my first dog and I had no special ideas about what I expect from a dog. Only the chemistry should be right. Something came in between with all dogs. Either the dog was already gone or somehow the gut feeling did not fit. On the Internet, there are various sites such as tiervermittlungen.de and edogs.de , on which I also looked, which bundle the numerous dogs from shelters throughout Europe and on which also a filter can be set. For example, a few months ago I was looking for a male herding dog, preferably a border collie (mixed breed). At some point, I saw Swift and it clicked immediately. However, he was already reserved. By chance, it turned out that of the people interested in him,  jumped off and I could adopt him. With my dog Nala I had expressed interest in another dog at that time, but they suggested Nala to me – a dog that changed my complete life. So the suggestions from the organization can be very helpful and should at least be considered. Check-in any case if the animal welfare organization is serious before you take in a dog. Signs for it are that the mediators are interested in you and your living situation, inform you in detail about the dog, and would take the dog back in an emergency. In addition, in a serious animal welfare organization, no puppies younger than 16 weeks are mediated and the departing dogs are vaccinated, skipped, and dewormed.

I had then in 2014 listened to the advice of the organization and looked at the said dog – Nala was already in a shelter in Germany, so I could visit her. This is super helpful and should definitely be claimed if possible. Swift came directly from Spain. I could not meet him before and it was a much bigger risk. In such cases, however, reputable animal welfare organizations try to give a lot of info about the dogs’ stay and provide you regularly with photos or videos.

After I had decided in each case for the dog, a preliminary control was accomplished with me at home. Thereby it is controlled whether the information about the living environment is really correct and these fit to the dog. Normally a nice conversation develops and I also got some good tips on the way with Swift.

After the preliminary inspection, a protection contract is signed, which is always drawn up by a reputable animal welfare organization. And then the adventure (new) dog begins.

The way to a new home

I picked up Nala at the animal shelter in Germany. Swift was brought to Germany with a transporter and I picked him up at a collection point. It is super important to secure the dog well and make his start into his new life as comfortable as possible. After Swift sat in the transporter for many hours, he now had to travel another 500 kilometers with us to the Ruhr area – an enormous strain on the dog. That’s why you should always have a companion with you when you pick him up – my boyfriend accompanied me and drove us, so I could fully concentrate on Swift. Every hour we took a short break, for this we left the highway and looked for a quiet meadow. Arriving at home, most shelter dogs first experience a culture shock. Nala had never seen a house from the inside before and Swift had only lived in between for a short time on a foster home and then also waited in the shelter for a new life. Depending on how old the dog is, different things now need to be considered.

Nala was about half a year old at that time and Swift four months. The younger the dogs are, the easier and faster they get used to their new home. Attention – also here exceptions confirm the rule! Since each dog is an individual, there are also very big differences here and it depends very much on the experience of the dog owner and on the circumstances. When Nala moved in with me, it took much longer for her to settle in. She was very scared and I was just very awkward, owed to the fact that Nala is my first dog and generally the first dog in our family. But despite the rough start, Nala still turned into a great dog. Swift’s acclimation according to currently is much easier. On the one hand, because he is generally quite a brave puppy, as soon as he has overcome his initial insecurity. In addition, I have much more knowledge about dogs and Nala can teach him a lot as a sovereign first dog.

What you should consider when moving in a shelter dog

In general, however, when adopting a dog from animal welfare, some things are always to be considered. First, you should make sure that the dog is always well secured. Most dogs do not know cars, bicycles, and other things that are common for us. So that the newly moved in dog does not immediately end up on the wanted list, it should always be secured either with a safety harness or with the combination harness and collar. Additionally, you should allow your new family member enough time to settle in and not expect too much from him. It is a masterpiece for every rescue dog to get used to his new life and the dog needs time as well as many positive experiences with unknown people, dogs, and the environment. You should also intensively deal with the theory around dog and dog training and at best organize professional support in the form of a dog school or a dog trainer. We also provide tips and training assistance in the Pupy app, guiding you and your dog on your journey together to become a great human-dog team.

It also took us a few months with Nala until we really found each other. A common hobby helped us. Every dog benefits from having a task and I can only recommend finding something with the dog that is fun for both of you. In the next few years, there will always be small and larger problems, but you face these challenges with every dog – no matter where his origin lies. It is important not to get discouraged and to keep looking for new solutions. By the intensive occupation with his dog, one is then rewarded with beautiful moments. I don’t want to imagine my life without my two great rescue dogs Nala and Swift. 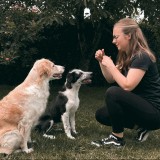